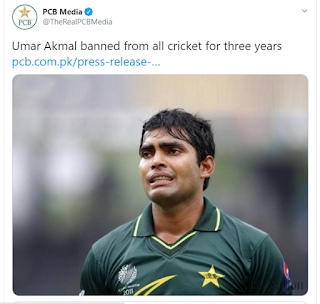 Umar Akmal is one of the most controversial personality in the Pakistan cricket team and he knows how to keep his name in hotlines in cricket world. Recently Pakistan Cricket Board banned Umar Akmal for being approached by a spot fixer and not informing the respective cricket board.

Some people are criticizing him for his behavior but some are targeting Pakistan Cricket Board for always treating its players in such a way. they say that PCB needs to start owning its players. Even former fast bowler Shoaib Akhtar aka Rawalpindi Express also showed some anger towards PCB’s behavior saying that PCB needs to improve itself in order to avoid such spot fixing incidents.

Now the main question is that whether Umar Akmal’s career in cricket has finished or he will learn from his mistakes and take a fresh start?
He may not be banned for complete 3 years, according to a report in India Today Uamr Akmal may have to serve only a part of the ban instead of complete 3 years
A closed source to Pakistan Cricket Board has informed the Indian agency that the people are jumping to a conclusion whereas a final verdict is yet to be announced and it may b e less than or of one year.
How and why did this close source to PCB informed Indian Media about this and why Pakistani press didn’t published anything regarding is yet another hot topic to discuss…
Corruption has become a big problem in Pakistan, it seems as if it has become a part of the culture. People in Pakistan have been indulging in corruption in all sectors. According to Muashara, a blog on Pakistani social issues, the current govt has recognized corruption as problem that needs to be dealt with. However, corruption in sports is yet ignroed.